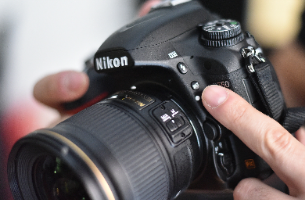 Do you want only part of your shot to be in focus, or all of it? If it's a landscape, 'all' is most likely your answer, but for portraits and wildlife, you might prefer to lose a distracting background. Either way, what you're doing is playing around with depth of field.

Depth of field is the zone of acceptable sharpness around the point you choose to focus your image – how sharp or blurred are the areas behind and in front of your subject. With shallow depth of field, only a narrow section of the image looks sharp and everything else is blurred, while wide depth of field keeps everything in the picture acceptably sharp from front to back. You control the depth of field by altering the lens aperture.

The aperture is the opening in the lens's diaphragm through which light passes. It's calibrated in f-stops, written as numbers (e.g.1.4, 2, 2.8, 4, 5.6, 8, 11, 16 and 32). The smaller the f-number, the larger the aperture, allowing more light through to hit the sensor, while the higher f-numbers mean a smaller aperture, allowing less light through.

All lenses have a maximum aperture, and on a NIKKOR lens you'll see this inscribed on the barrel e.g. f/3.5-5.6 or 1:3.5-5.6, where '3.5' and '5.6' refer to the maximum aperture for the short and long ends of the zoom range respectively. A lens is said to be 'fast' if its maximum aperture is a very small number – usually f/1.2 to f/4 – as that means it will open very wide, letting in lots of light and enabling faster shutter speeds in lower light conditions.

To control depth of field, you need to choose the appropriate lens aperture, which means using a shooting mode that gives you control over the aperture. While you can use program (P) mode to do this in a limited way, you'll only get full control with aperture priority mode (A) or manual (M). In aperture priority, you select the aperture using the relevant command dial, and the camera sorts out the shutter speed; in manual, you can choose both the aperture and the shutter speed with the command dial.

Shallow depth of field enables you to throw background and foreground details so far out of focus that they're beyond recognition, directing the eye to the main focal point in the picture. For shallow depth of field you need to select the widest aperture possible e.g. f/1.2, f/2, f/2.8, f/3.5, f/4 (depending on your lens's capabilities). This is why many pros prefer lenses with the widest maximum apertures, as these allow depth of field to be truly minimised.

Another way to ensure a pleasing, very shallow depth of field is to use a telephoto or long prime lens with a focal length of 300, 400 of 500mm. Its narrower angle of view compared to that offered by more wideangle lenses means the area of background captured is smaller and more magnified, which renders it even more blurred out, which can be very pleasing in portraits.

The way your lens renders the out-of-focus points of light with very shallow depth of field is called bokeh (pronounced boh-keh), from the Japanese boke, meaning blur or haze. Bokeh is affected by the shape of the lens's diaphragm blades (the aperture), so a lens with more circular-shaped blades will have rounder, softer orbs of out-of-focus highlights, whereas a lens with an aperture that is more hexagonal in shape will create more hexagonal highlights.

For really good bokeh, you need to use as fast lens, with at least an f/2.8 aperture, and shoot as wide open as possible – around f/2, f/1.8 or f/1.4 is ideal. Fast prime lenses, such as the 50mm f/1.8D NIKKOR, are ideal. But don't worry if you don't own a very fast lens, or if you're shooting with a COOLPIX that doesn't have manual or aperture priority options. By increasing the distance between the background and your subject, you can still get bokeh in images shot at mid-range apertures like f/5.6 or f/8 as long as you shoot using a larger focal length.

Large (wide) depth of field helps to keep everything in the frame acceptably sharp from front to back, making it ideal for many landscape situations. To achieve it, you'll need to set as small an aperture as possible e.g. f16, and use a focus point about one third of the way into the scene. You can also use a large depth of field to keep two objects at different distances away sharp in frame. Just switch to manual focus, then focus on the midpoint between them.

The downside of maximising depth of field is that the required narrow aperture means a lot less light is now hitting the sensor, so you'll also need to increase the ISO and/or use a slower shutter speed. Slower shutter speeds increase the risk of camera-shake if you're shooting hand-held, so it's advisable to use a tripod and shutter release to get your shot. You'll get the best results with a wideangle lens or the wideangle end of a zoom.